The Government has been continuing to develop its approach to online safety in 2021. In the Queen’s Speech in May, the Government committed to bringing forward a Draft Online Safety Bill for pre-legislative scrutiny.

In July, a joint committee of both of Houses of Parliament was established to scrutinise the legislation, which was Chaired by Damian Collins MP.

We responded to the Committee’s call for evidence in September 2021, sharing our perspective on the draft Bill, recommending:

You can read our response to the draft Bill.

In December when the Committee reported back, they concluded that we had made a “persuasive case” for co-designation and that scrutiny of the Bill could have been improved if more details about how co-designation and the timelines for when decisions might be made were published alongside the Bill.

We will continue to engage with Ofcom and the Government in 2022 to ensure that the Bill is effective in protecting children from harm online from day one.

Susie Hargreaves, our CEO, was invited to give evidence to the DCMS Select Committee in October 2021 about online safety and online harms.

She set out our response to the draft Online Safety Bill and highlighted some of the trends that we’ve seen, for instance the dramatic increase in “self-generated”/ “first-person produced” indecent images of children.

Susie also mentioned our concerns about companies introducing end-to-end encryption (E2EE) without effective mechanisms in place to continue removing illegal content and said that we would like to see age verification for adult websites .

In December 2021, the funding the IWF and our partners in the UK Safer Internet Centre (UKSIC) received from the European Union came to an end, ending a decade’s worth of EU funding. Therefore, we focused our efforts on securing the £1.3 million of funding per annum which had previously been provided by the EU - a figure which amounted to 50% of the Centre’s funding.

After lengthy negotiations with the UK Government, politicians and other key stakeholders, the .UK Domain registry, Nominet, pledged £5.1m to help fund the UKSIC for the next three years, allowing us to continue our work to ensure that children can use the internet safely, illegal and harmful content is removed and users continue to be protected online.

We would like to thank all Parliamentarians who signed an open letter asking for the Government to replace our funding, which was vital in helping us make our case.

Throughout the past year, as part of the UK Safer Internet Centre, we ran the Secretariat for the All-Party Parliamentary Group (APPG) on Social Media. We helped them to conduct an inquiry into the increased number of “self-generated”/ “first-person produced” indecent images of children.

The inquiry received written evidence from 18 individuals and organisations, as well as research reports and documents to support the final recommendations. There were also four oral evidence sessions with academics, children’s charities, law enforcement and industry.

The inquiry concluded in September 2021 and made 10 recommendations, including:

You can read the full report here.

We would particularly like to thank Chris Elmore MP who chaired the APPG up until his recent appointment as a shadow DCMS minister in December. We would also like to thank both Minister, Victoria Atkins MP, and Shadow Safeguarding Minister, Jess Phillips MP, for their ongoing support throughout and for speaking at the launch and report stages of the inquiry.

For Safer Internet Day in February 2021, we ran a virtual event with politicians where children from St. Patrick’s College, Dungannon, were able to discuss their views on this year’s theme: “An internet we can trust exploring reliability in the online world.” The event was chaired by Dr. Lisa Cameron MP, a Vice Chair of the APPG on Social Media and included contributions from the Shadow Digital Minister, Chi Onwurah MP and Will Gardner, CEO of Childnet International. Over 30 MPs and Peers also supported Safer Internet Day by tweeting their support online.

Safer Internet Day reached more children and young people with internet safety resources and messaging than ever before: 51% of children throughout the UK and 38% of their parents.

We were delighted that the Department for Digital, Culture, Media and Sport (DCMS) and the Home Office launched their Safety Tech Challenge Fund in 2021 to encourage the development of new technologies to stop the spread of child sexual abuse material in encrypted channels.

Five projects were awarded an initial £85,000 from the Fund, including a partnership between the IWF, Cyan Forensics and Crisp Thinking.

Violence against Women and Girls

In 2021 the Home Office opened a consultation to inform their new strategy to tackle violence against women and girls. Given that over 90% of the victims our analysts see are young girls, we believe we have a unique expert contribution about the online aspects of this issue.

You can read our submission here.

In March 2021, the Centre for Social Justice published its report, Unsafe Children. The Commission was Chaired by the current Health Secretary, Rt. Hon. Sajid Javid MP and made over 100 recommendations on how the online and offline response to CSE/A could be prevented or improved further.

IWF CEO, Susie Hargreaves, served as a Commissioner on the report and spoke on a panel to promote the report and its findings at the Conservative Party Conference in Manchester in October. 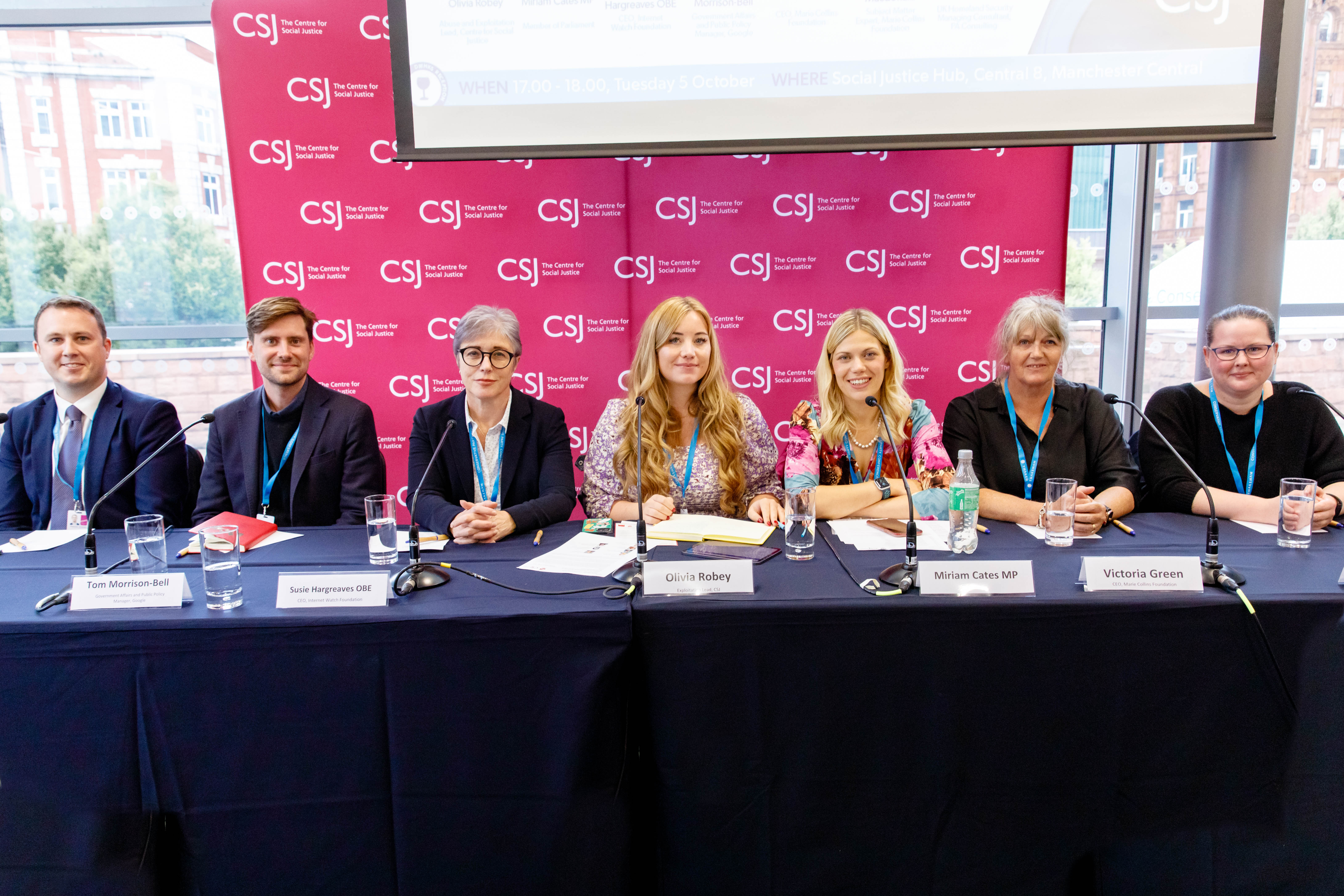 Relationship with Law Enforcement and the Crown Prosecution Service (CPS)

Throughout the year we continued to work closely with our law enforcement partners, specifically the National Crime Agency Child Exploitation and Online Protection command (NCA CEOP) and the National Police Chiefs’ Council (NPCC). Our CEO is a member of the NCA’s Strategic Governance Group and our Hotline Director is a member of the NCA’s Prevent group. In addition, the CEO sits on the Crown Prosecution Service Child Sexual Exploitation and Abuse (CPS CSEA) Advisory Group. By working closely, we ensure we share crucial data which informs the operations of the IWF.

The EU is looking to update the 2011/93 directive on combating the sexual abuse and sexual exploitation of children and child pornography.

We submitted responses to two consultations on this subject in April and October. We recommend that the European Commission pursue both new legislation on prosecuting offenders, protecting victims, and preventing offences in addition to non-legislative measures. We particularly believe that the current directive should be replaced by a regulation to solve some of the current transposition issues.

You can read our submission here and here.

The European Commission has been making progress during 2021 on the introduction of a Digital Services Act (DSA) that will modernise the e-Commerce directive and this relates to the removal of illegal content and other online safety issues.

We welcome this move and would like to see a clearer legal role for hotlines in Europe. We think that hotlines should be given trusted flagger status and be given permission to proactively search for content. We believe this could dramatically increase the amount of illegal content that is identified and actioned.

As 2021 ended, both the European Parliament and European Council negotiating positions were established and it is anticipated that trialogue negotiations on the file will begin in January 2022. The IWF has been meeting with MEPs and attaches during December 2021 to ensure our views are represented ahead of the trialogues.

You can read our response to European Commission’s public consultation on the DSA here.

The IWF responded to a Call for Inputs for the report of the UN Special Rapporteur on the sale and sexual exploitation of children, including child prostitution, child pornography and other child sexual abuse material.

You can read our response here.

The Senate in the Philippines passed a Bill on Special Protections against Online Sexual Abuse and Exploitation of Children in May 2021, which is now being discussed by the House of Representatives. This sets out new duties for ISPs, including that they:

“Develop and adopt a set of systems and procedures for preventing, blocking, detecting, and reporting of OSAEC committed within their platforms, which are compatible with the services and products they offer, including the maintenance and management of an updated list of URLs containing child sexual abuse and exploitation material by partnering with organizations that maintain the most comprehensive list of URLs with CSAESM, and those with hashes of the same, such as the Internet Watch Foundation and/or INHOPE hotline.”

You can read the bill here.

In December, the IWF’s Senior Policy and Public Affairs Manager spoke at the United Nations’ Internet Governance Forum on the Dynamic Coalition on Children’s Rights in the Digital Environment.

The session was entitled: “Regulate or prevent to protect children: A false Dichotomy.” The session concluded that Child Rights groups must find a shared voice to improve coordination and help build consensus around ways to balance child protection and regulation that is respective of fundamental human rights such as privacy online.

You can read the report from the session here.

In July, IWF CTO, Dan Sexton spoke on a panel at the European Dialogue on Internet Governance. The panel explored the theme: “Can privacy, security and encryption co-exist?”

Further details of the session and the transcript can be found here.

In September, IWF CEO, Susie Hargreaves joined the inaugural meeting of the Global Coalition for Digital Safety. The forum brings together senior leaders from the technology industry, Government Ministers, and online safety experts from all over the world.

The Group has three workstreams:

Caring for our people Previous
Complaints Next